Robbing the poor, trashing the natural world: Europe’s farm subsidies are an obscenity.

By George Monbiot, published in the Guardian 27th November 2012

There’s a neat symmetry in the numbers which helped to sink the European summit. The proposed budget was €50bn higher than the UK government could accept(1). This is the amount of money that European farmers are given every year(2). Britain’s contentious budget rebate is worth €3.6bn a year(3): a fraction less than our contribution to Europe’s farm subsidies(4).

Squatting at the heart of last week’s summit, poisoning all negotiations, is a vast wobbling lump of pork fat called the Common Agricultural Policy. The talks collapsed partly because the president of the European Council, pressed by Francois Hollande, proposed inflating the great blob by a further €8bn over six years(5). I don’t often find myself on their side, but the British and Dutch governments were right to say no.

It is a source of perpetual wonder that the people of Europe tolerate this robbery. Farm subsidies are the 21st century equivalent of feudal aid: the taxes mediaeval vassals were forced to pay their lords for the privilege of being sat upon(6). The single payment scheme, which accounts for most of the money, is an award for owning land. The more you own, the more you receive.

By astonishing coincidence, the biggest landowners happen to be among the richest people in Europe. Every taxpayer in the EU, including the poorest, subsidises the lords of the land: not once, as we did during the bank bailouts, but in perpetuity. Every household in the UK pays an average of £245 a year to keep millionaires in the style to which they are accustomed(7). No more regressive form of taxation has been devised on this continent since the old autocracies were overthrown. Never mind French farmers dumping manure in the streets: we should be dumping manure on French farmers.

It would be unfair to stop there. There are plenty of people in the UK who deserve the same treatment. Last year the House of Commons environment, food and rural affairs committee, in a bizarrely unbalanced report, maintained that the farm subsidy system does not go far enough(8). It wants to supplement payments for owning land with a resumption of headage payments: money for every animal farmers cram into their fields.

This nonsense outfrenches the French. There were excellent reasons for phasing out headage payments in 2003. They provided an incentive to load the hills with as many animals (mostly sheep) as possible, regardless of the impact on the natural world and the welfare of the sheep. The extra sheep flooded the market, bankrupting the farmers whom the payments were supposed to protect. The committee’s proposal accords with a long-standing and idiotic European principle: the less suitable a region is for farming, the more money is spent to ensure that farming persists there. This is the rationale for such extra subsidies as Less Favoured Area payments.

This approach is justified by a groundless claim: that farming, particularly in the uplands, is required to protect the environment. The European Commission maintains that farming is essential to “combat biodiversity loss” and to reduce emissions of greenhouse gases(9). The parliamentary committee claims that fewer cattle and sheep in the hills has led to “undergrazing”, which has caused such horrors as the growth of bracken(10). How nature managed to survive for the three billion years before humans arrived to look after it is anyone’s guess.

These statements are seldom accompanied by anything resembling a scientific reference. They reflect a biblical view of human stewardship. It would be lovely to believe that hill farmers, the landholders with whom it is easiest to sympathise, are delivering only blessings, but this is pure wish fulfilment.

Flooding of the kind now blighting the UK is exacerbated by grazing in the hills, which prevents trees and scrub from growing(11). The sparser the vegetation with which the hills are clothed, the faster the water runs off. Woodland and scrub preserve more carbon – both above and below ground – than pasture does(12). There has been a catastrophic decline in farm wildlife over the past few decades, as a result of grazing, drainage, sheep dip residues poisoning the streams and farmers’ clearance of habitats(13). Last week’s shocking report on the state of the UK’s birds shows that while 20% of all birds have been lost since 1966, on farmland the rate is over 50%(14). 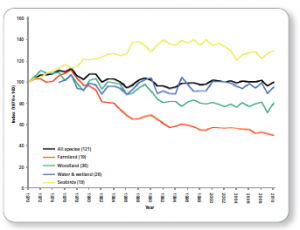 The subsidy system doesn’t just encourage this destruction: it demands it. A European rule insists that to receive their main payment farmers must prevent “the encroachment of unwanted vegetation on agricultural land.”(15) In other words, they must stop trees and bushes from growing. They don’t have to grow crops or keep animals on the land to get their money, but they do have to keep it mown(16). All over Europe, essential wildlife habitats are destroyed – often on agriculturally worthless land – simply to expand the area eligible for subsidies(17).

The European Commission maintains that subsidies are required to help farmers “contribute to growing world food demand, expected … to increase by 70% by 2050.”(18) But if world food demand is expected to grow by 70%, why do we need subsidies? Not long ago, farm payments were justified on the grounds that world demand was low. Now they are justified on the grounds that world demand is high. The policy comes first, the justifications later.

While David Cameron is right to press for major cuts, he is simultaneously seeking to goldplate the injustice, by opposing the only vaguely progressive measure in the EC’s proposals for reform. The commission suggests capping the money farms can receive, at a maximum of €300,000(19). This, our government complains, would discourage the “consolidation” of land(20). Britain already has one of the highest concentrations of land ownership on earth(21). How much more “consolidation” do we need? And how much more brazenly could Cameron favour the interests of his aristocratic chums?

Europe is in crisis. It is in crisis because the money has run out. Essential public services are being cut (often unjustly and unnecessarily), but at the same time €50bn a year is being paid to landowners. This spending is so gross, so nakedly indefensible that it’s hard to understand why it does not obsess activists across the political spectrum: from UK Uncut to the Tax Payers’ Alliance. Seldom in the field of human conflict was so much given by so many to so few.

11. For example, compare Figure 20.22 in Chapter 20 of the UK National Ecosystem Assessment with Figure 13.14a in Chapter 13. The increase in flood events bears no relationship to changes in rainfall. The other major change in that period has been a massive increase in stocking rates in the catchment of the Wye. http://uknea.unep-wcmc.org/Resources/tabid/82/Default.aspx

16. The UK government interprets this (GAEC 12) as follows: “You must cut scrub and cut or graze rank vegetation on the whole area of your agricultural land that you do not use for agricultural production at least once every 5 years, in order to prevent encroachment of scrub”. http://rpa.defra.gov.uk/rpa/index.nsf/293a8949ec0ba26d80256f65003bc4f7/764beac195015cca802573aa00535bc4!OpenDocument

20. Department for Environment Food and Rural Affairs, January 2011.
UK response to the Commission communication and consultation “The CAP towards 2020: Meeting the food, natural resources and territorial challenges of the future”. http://archive.defra.gov.uk/foodfarm/policy/capreform/documents/110128-uk-cap-response.pdf