Why do we transfer the real health risks inflicted by coal onto nuclear energy?

By George Monbiot, published in the Guardian 17th December 2013

Most of the afflictions wrongly attributed to nuclear power can rightly be attributed to coal. I was struck by this thought when I saw the graphics published by Greenpeace on Friday, showing the premature deaths caused by coal plants in China(1). The research it commissioned suggests that a quarter of a million deaths a year could be avoided there if coal power there were shut down(2). Yes, a quarter of a million.

Were Greenpeace to plot the impacts of nuclear power on the same scale, the vast red splodges depicting the air pollution catastrophe suffered by several Chinese cities would be replaced by dots invisible to the naked eye. 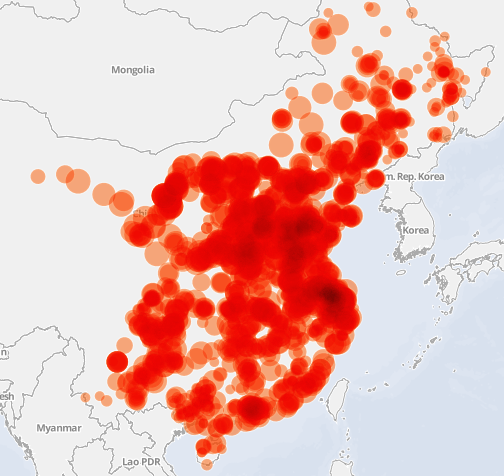 This is not to suggest that there are no impacts, but they are tiny by comparison. The World Health Organisation’s analysis of the Fukushima disaster concludes that “for the general population inside and outside of Japan … no observable increases in cancer rates above baseline rates are anticipated.”(3) Only the most contaminated parts of Fukushima prefecture are exposed to any significant threat: a slight increase in the chances of contracting cancer. Even the majority of the emergency workers have no higher cancer risk than that of the general population(4). And this, remember, was caused by an unprecedented disaster. The deaths in China are caused by business as usual.

The tiny risk imposed by nuclear power has both obscured and invoked the far greater risk imposed by coal. Scare stories about nuclear power are a gift to the coal industry. Where they are taken seriously by politicians – as they have been in Japan – and cause a switch from nuclear to coal, they kill people(5).

Since the tsunami in 2011, the internet has been awash with ever more lurid claims about Fukushima. Millions have read reports which claim that children on the western seaboard of the US are dying as a result of radiation the damaged plant released(6,7). It doesn’t seem to matter how often and effectively they are debunked: they keep on coming(8). But children in the US really are dying as a result of pollution from coal plants, and we hear almost nothing about it.

Plenty of reports also propose that the water on the Pacific coast of North America is now dangerous to swimmers, and the fish there too radioactive to eat(9,10,11). Again, it’s not true. Except in the immediate vicinity of the plant, any extra radiation to which fish in the Pacific are exposed is minute by comparison to the concentration in their tissues of polonium-210, which occurs naturally in seawater(12,13). There are, however, genuine dangers associated with another toxic contaminant found in fish: mercury(14). What is the primary source of mercury pollution? Ah yes, coal burning(15).

In October, for the first time, the World Health Organisation officially listed both gaseous outdoor pollution and airborne particulates as carcinogenic to humans(16). Exposure levels, it notes, are rising sharply in some parts of the world. In 2010 an estimated 223,000 deaths from lung cancer were caused by air pollution(17).

But these cancers, though wildly outstripping those correctly attributed to manmade radiation, are just a small part of the pollution problem. Far greater numbers are afflicted by other diseases, including asthma, bronchitis, emphysema, heart disease, hypertension, strokes, low birth weight, pre-term delivery, pre-eclampsia and (through heavy metal exposure in the womb) impaired brain function.

Three hundred microgrammes of fine particulates per cubic metre of air is classed as severe pollution, the point at which children and elderly people should not leave their homes. As Greenpeace points out, in Shanghai a fortnight ago and in Harbin in October, concentrations exceeded 500 microgrammes(18). By far the greatest source of these particles is coal burning. In total, air pollution in northern China, according to a study published in Proceedings of the National Academy of Sciences, has cut average life expectancy by five and a half years(19).

We have exported much of our pollution – and its associated deaths – but the residue in our own countries is still severe. A study by the Clean Air Task Force suggests that coal power in the US causes 13,200 premature deaths a year(20). In Europe, according to the Health and Environment Alliance, the figure is 18,200(21). A study it cites suggests that around 200,000 children born in Europe each year have been exposed to “critical levels” of methylmercury in the womb(22). It estimates the health costs inflicted by coal burning at between €15 and 42 billion a year. Do you still reckon coal is cheap?

You’re picturing filthy plants in Poland and Romania, aren’t you? But among the most polluting power stations in Europe, Longannet in Scotland is ranked 11th. Drax, in England, is ranked 7th(23). Last week the House of Lords failed to pass an amendment which would have forced a gradual shutdown of our coal-burning power plants: they remain exempted from the emissions standards other power stations have to meet(24,25).

While nuclear power is faltering, coal is booming. Almost 1,200 new plants are being developed worldwide(26): many will use coal exported from the United States and Australia. The exports are now a massive source of income for these supposedly greening economies(27). By 2030, China is expected to import almost five times as much coal as it does today(28). The International Energy Agency estimates that the global use of coal will increase by 65% by 2035(29). Even before you consider climate change, this is a disaster.

You don’t have to be an enthusiast for atomic energy to see that it scarcely features as a health risk beside its rival. I wonder whether the nuclear panic might be a way of not seeing. Displacement is something we all do: fixing on something small to avoid engaging with something big. Coal, on which industrialism was built, which over the past 200 years has come to seem central to our identity, is an industry much bigger and nastier and more embedded than the one we have chosen to fear. I don’t believe our choice is accidental.

5. Japan has so far commissioned 3.6GW of coal plants to cover its nuclear shutdown. http://www.miningweekly.com/article/global-coal-demand-growth-calls-for-intensified-search-for-clean-coal-solution-2013-12-13