How the government’s farming policies have produced a perfectly designed system for flooding your home.

By George Monbiot, published in the Guardian 18th February 2014

It has the force of a parable. Along the road from High Ham to Burrowbridge, which skirts Lake Paterson (formerly known as the Somerset Levels), you can see field after field of harvested maize. In some places the crop lines run straight down the hill and into the water. When it rains, the water and soil flash off into the lake. Seldom is cause and effect so visible.

That’s what I saw on Tuesday. On Friday, I travelled to the source of the Thames. Within 300 metres of the stone that marked it were ploughed fields, overhanging the catchment, left bare through the winter and compacted by heavy machinery. Muddy water sluiced down the roads. A few score miles downstream it will reappear in people’s living rooms. You can see the same thing happening across the Thames watershed: 184 miles of idiocy, perfectly calibrated to cause disaster. 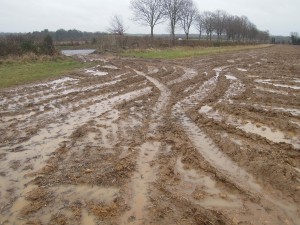 Soil and water pour off a field 300m from the source of the Thames.

Two realities, perennially denied or ignored by members of this government, now seep under their doors. In September the environment secretary, Owen Paterson, assured us that climate change “is something we can adapt to over time and we are very good as a race at adapting.”(1) If two months of severe weather almost sends the country into meltdown, who knows what four degrees of global warming will do?

The second issue, once it trickles into national consciousness, is just as politically potent: the government’s bonfire of regulations. Almost as soon as it took office, it appointed a task force to investigate farming rules(2). Its chairman was the former director-general of the National Farmers’ Union. Who could have guessed that he would recommend, er, “an entirely new approach to and culture of regulation … Government must trust industry.”(3) The task force’s demands, embraced by Mr Paterson, now look as stupid as Gordon Brown’s speech to an audience of bankers in 2004: “in budget after budget I want us to do even more to encourage the risk takers”(4). 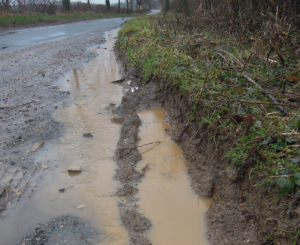 Down the road and into the river.

Six weeks before the floods arrived, a scientific journal called Soil Use and Management published a paper warning that disaster was brewing(5). Surface water run-off in south-western England, where the Somerset Levels are situated, was reaching a critical point. Thanks to a wholesale change in the way the land is cultivated, at 38% of the sites the researchers investigated, the water – instead of percolating into the ground – is now pouring off the fields.

Farmers have been ploughing land that was previously untilled and switching from spring to winter sowing, leaving the soil bare during the rainy season. Worst of all is the shift towards growing maize, whose cultivated area in this country has risen from 1,400 hectares to 160,000 since 1970(6). In three quarters of the maize fields in the south west, the soil structure has broken down to the extent that they now contribute to flooding. In many of these fields, soil, fertilisers and pesticides are sloshing away with the water. And nothing of substance, the paper warned, is being done to stop it(7). Dated: December 2013.

Maize is being grown in Britain not to feed people, but to feed livestock and, increasingly, the biofuel business(8). This false solution to climate change will make the impacts of climate change much worse, by reducing the land’s capacity to hold water.

The previous government also saw it coming. In 2005 it published a devastating catalogue of the impacts of these changes in land use(9). As well as the loss of fertility from the land and the poisoning of watercourses, it warned, “increased run-off and sediment deposition can also increase flood hazard in rivers.” Maize, it warned, is a particular problem because the soil stays bare before and after the crop is harvested, without the stubble or weeds required to bind it. “Wherever possible,” it urged, “avoid growing forage maize on high and very high erosion risk areas.”

The Labour government turned this advice into conditions attached to farm subsidies(10). Ground cover crops should be sown under the maize and the land should be ploughed, then resown with winter cover plants within ten days of harvesting, to prevent water from sheeting off. So why isn’t this happening in Somerset?

Because the current government dropped the conditions. Sorry, not just dropped them. It issued – wait for it – a specific exemption for maize cultivation from all soil conservation measures(11). It’s hard to get your head round this. The crop which causes most floods and does most damage to soils is the only one which is completely unregulated. 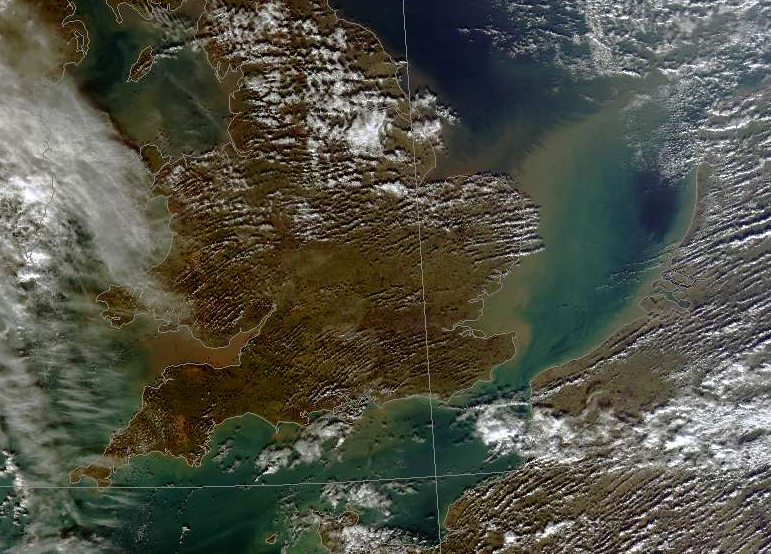 There goes Britain: a satellite image shows soil pouring out of our rivers on February 16th. From the Dundee Satellite Receiving Station.

When soil enters a river we call it silt. A few hundred metres from where the soil is running down the hills, a banner over the River Parrett shouts “Stop the Flooding, dredge the rivers”. Angry locals assail ministers and officials with this demand. While in almost all circumstances, dredging causes more problems than it solves(12), and though, as even Owen Paterson admits, “increased dredging of rivers on the Somerset Levels would not have prevented the recent widespread flooding”(13), there’s an argument here for a small amount of dredging at strategic points. But to do it while the soil is washing off the fields is like trying to empty the bath while the taps are running.

So why did government policy change? I’ve tried asking the environment department: they’re as much use as a paper sandbag(14). But I’ve found a clue. The Farm Regulation Task Force demanded a specific change: all soil protection rules attached to farm subsidies should become voluntary(15). They should be downgraded from a legal condition to an “advisory feature”. Even if farmers do nothing to protect their soil, they should still be eligible for public money.

You might have entertained the naïve belief that in handing out billions to wealthy landowners we would get something in return. Something other than endless whining from the National Farmers’ Union(16). But so successfully has policy been captured in this country that Defra – which used to stand for the Department for Environment, Food and Rural Affairs – now means Doing Everything Farmers’ Representatives Ask. We pay £3.6bn a year for the privilege of having our wildlife exterminated, our hills grazed bare, our rivers polluted and our sitting rooms flooded.

Yes, it’s a parable all right, a parable of human folly, of the kind that used to end with 300 cubits of gopher wood and a journey to the mountains of Ararat. Antediluvian? You bet it is.

9. Defra, September 2005. Controlling soil erosion: a manual for the assessment and management of agricultural land at risk of water erosion in lowland England. http://archive.defra.gov.uk/environment/quality/land/soil/documents/soilerosion-lowlandmanual.pdf

14. I found the exchange very telling. On Friday afternoon I sent the following email:

Thanks ***.  On another matter – Cross Compliance – I’ve just come across the exemption from GAEC 1 conditions for maize cultivation. Here’s what The Guide to Cross Compliance in England 2014 says:
Post-harvest management of land
If your land has carried a crop of oil-seeds, grain legumes or cereals (other than maize) which has been harvested by either combine harvester or mower, then:
E. You must
1. meet one of the following conditions on that land from the first day after harvest until the last day of February in the following year (dates inclusive):
the stubble of the harvested crop remains in the land;
the land is left with a rough surface following operations such as ploughing, discing or tine cultivation;
the land is under cultivation sequences used to create stale seedbeds;
the land is sown with a temporary cover crop. If this becomes grazed out or cultivated out during the post-harvest period, a rough surface must be left as soon as conditions permit;
the land is sown with a crop within 10 days of having been prepared as a seedbed.

I’m pretty staggered by this. Why is maize – by far the most potent soil erosion crop – exempted from these conditions? Have you published something that provides the rationale?

All the best, George

Defra ignored it. I rang first thing on Monday morning and was promised an answer. Then again. Then again. Finally, after my deadline had passed, they sent me the following: “Under cross compliance rules farmers are required to put measures in place to prevent soil erosion and run off for all cropping regimes. Specific measures for each crop must be included in their Farm Soil Plan, including where the post-harvest management derogation is applied.” You’ll note that there is no mention of maize, or the exemption. Or any attempt at an explanation. This, dear reader, is what you are paying for.