Misleading claims by Discovery and other channels help to fuel wildlife massacres.

By George Monbiot, published on the Guardian’s website, 19th February 2014.

There are, I think, two factors at work. The first is the desire to eliminate all risk from our lives, to move through a world that is safe, predictable and tame, with “no alarms and no surprises”.

The second emerges paradoxically from the consequences of that desire. Having achieved, or almost achieved, the object of the great civilisational quest – To Know What Comes Next – we have been rewarded with a new set of unmet needs. Without natural hazards, without the thrills and spills we evolved to withstand, our lives sometimes feel exceedingly dull. We have gained much from the predictability we’ve manufactured, and lost something too.

Both impulses, I believe, inform the Western Australian shark cull. The cull appears to be unscientific and counter-productive, a grand act of vandalism that endangers the top predators – already greatly depleted – which sustain the ecosystem of the seas. But it is motivated by a desire with which many people can connect: to ensure that nothing untoward ever happens to anyone, even to those who venture into the wild waters of the Indian Ocean, which the premier of Western Australia now hopes to remodel as a giant hotel swimming pool.

It also seems to be informed by our desire, arising I think from the extreme domesticity of our lives, to believe that any remaining hazards presented by the natural world are far more dangerous than they really are. A huge entertainment industry – books, films, games – trades in this manufactured fear. It sells.

Last year Adam Welz wrote about the television programmes that demonise wildlife in order to boost their ratings. Discovery Channel’s series Yukon Men maintained that the town of Tanana “is under siege by hungry predators … there’s always somebody that’s not going to make it home”. It claimed that “there have been twenty fatal wolf attacks in the last ten years”, implying that these took place in and around Tanana. In reality, though there are 60,000 wolves in North America, across the 21st Century there has so far been one confirmed and one possible killing by wolves in the entire continent.

The series showed hunters carrying out horrible acts of cruelty as they clumsily tried to kill the animals they had caught in their leghold traps. But it assured us that this barbarity was necessary, as in Alaska, it’s “kill or be killed”. Wolverines, alongside lynx and wolves, have to be wiped out, because, a contributor asserted, “I don’t think any human being could keep an attacking wolverine from killing them.” When Adam investigated this claim, he “could not find a single documented case of a wolverine even attacking a person anywhere in the world, ever.”

If you think that’s bad, you should see what Discovery did next. In August last year it released a film, which purported to be a factual documentary, called “Megalodon: the monster shark lives”. This claimed to show that Carcharadon megalodon still exists.

That this creature once lived, and that it was magnificent and terrifying is undisputed. It was so big that, as one biologist correctly points out, the great white is approximately the size of its claspers (the male genitals). The marks of its monstrous teeth on their bones suggest that it ate whales. 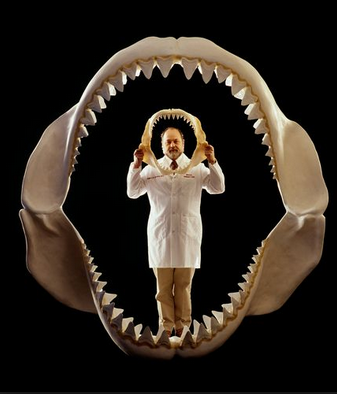 The big jaws are a life-sized model of Megalodon’s. The smaller are those of a large great white shark. Photo: Corbis

(Caption: This picture, perhaps by comparison to those that follow, is of a real scientist, making a real comparison. The jaw in which he’s standing is a life-sized model of Carcharadon megalodon’s. The one he’s holding is a large great white’s.)

Does the monster shark still live, as the title suggests? Though it is supposed to be impossible to prove a negative, in this case we can say with a high degree of confidence that it does not. It does not appear in the fossil record in the past two million years or so. It depended for its food and reproduction on shallow water, so it is not, as the movie makers would like us to believe, lurking unseen in the abyss. There have been no sightings, no carcasses, no remains of any prey, no terrifying encounters. At 60 feet long, highly mobile and frequently hungry, it’s not the kind of thing that would be easily overlooked.

Never mind. You want a shark? We’ll get you a shark.

The film showed what it claimed was amateur footage, shot on a camera supposedly recovered from a wreck, of four suspiciously beautiful people fishing off the coast of South Africa on April 5th 2013. Suddenly, the footage shows, the boat was attacked by something enormous. Its passengers were never seen again. The “found footage” was followed by clips from South African news programmes reporting the event.

But there appears to be no record of these deaths, or of the news reports.

The film ran more “amateur footage” and a photo, which purported to show a whale carcass that had been attacked by a giant shark. You can judge for yourselves how real it looks. 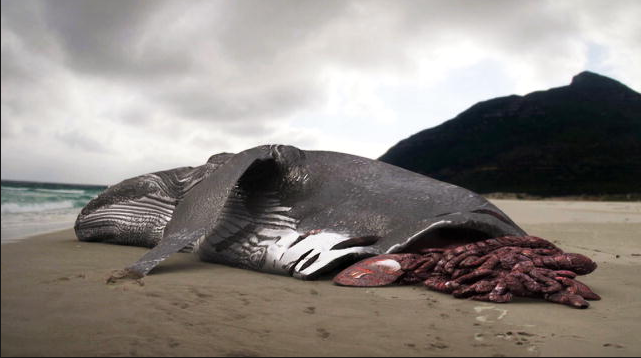 The photo of a whale carcass which Discovery claims to have “found”.

A little fishy? Certainly not. A marine biologist called Collin Drake assures us that “you can clearly see a bite radius in the whale … The whale looks to be almost bit in half, it’s absolutely insane. Local marine biologists analysed the whale and determined – as crazy as it sounds – that the tail was bitten off in one bite.”

Which local marine biologists? Analysed it where? And while we’re at it, who the hell are you? 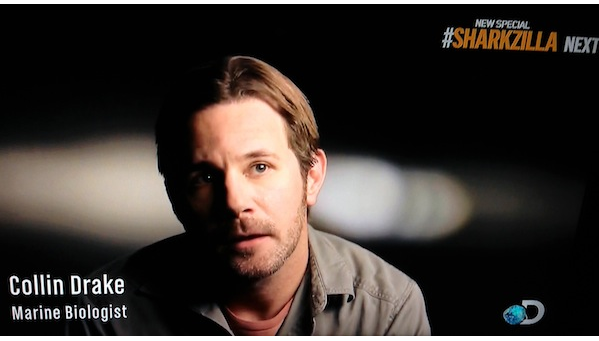 “Collin Drake”. Whoever the heck that is.

Good question. No one has been able to find any record of a marine biologist called Collin Drake, or of the other expert contributor to the programme, another “marine biologist” called Madelyn Joubert. They are as elusive as the giant shark.

Here are two more “amateur stills” used by the film, that purport to depict the Megalodon. Funny that neither of them surfaced before the documentary was published: again, they are not the kind of thing that usually goes unnoticed. And how fortunate that one of them happens to share the frame with that other staple of cable programming, a Nazi U-boat! If only there had been a swastika on the dorsal fin: the film makers would have died and gone to heaven.

Hang on a moment – I’ve just noticed that there is in fact a swastika in the photo, albeit not on the shark. Another remarkable stroke of luck. 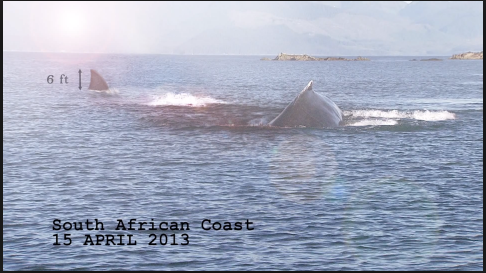 Discovery says this photo was snapped by an amateur. Right. 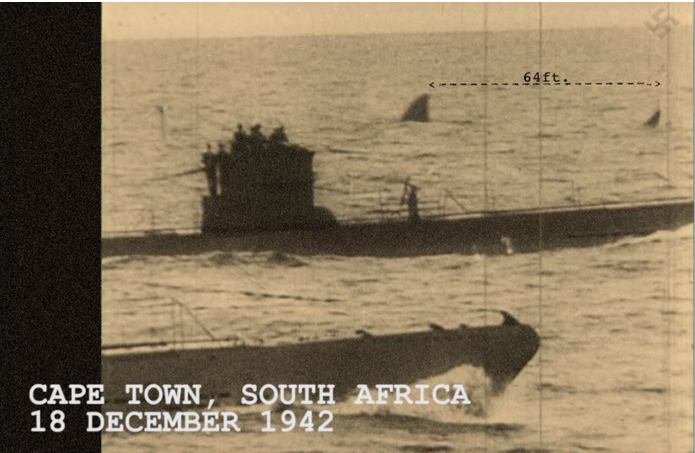 U-boat and giant shark: a match made in heaven.

By the way, I will send a signed copy of my latest book to the first person who can locate the original U-boat image, with or without the extract of shark.

When Discovery was accused of jumping the shark, its spokesperson said, “We have found that people are open to exploring different ideas and concepts in addition to the more traditional fare that we air … we stand behind all of our content and are proud of it.” The show “used a novel storytelling device to engage that imagination and curiosity in a way that was disclosed to audiences throughout the program.”

Was it? Where? The only possible note of caution was the non-disclaimer disclaimer that flashed past at the end of the programme, which said:

“None of the institutions or agencies that appear in the film are affiliated with it in any way, nor have approved its contents. Though certain events and characters in this film have been dramatized, sightings of “Submarine” [the name it gives to the supposedly extant shark] continue to this day. Megalodon was a real shark. Legends of giant sharks persist all over the world. There is still a debate about what they may be.”

As the marine biologist Christie Wilcox pointed out,

“Saying agencies haven’t approved its contents doesn’t mean what you presented didn’t happen. “Certain events” doesn’t disclose what in the supposed documentary is real and what is fake. But more importantly, Discovery chose to use the word “dramatized” instead of “fictional”, the one they used in the disclaimers for their Mermaids mocumentaries. “Dramatized” simply means acted out—it doesn’t tell you whether the original story is real or fake.”

Unsurprisingly perhaps, this concatenation of bunkum broke all viewing records, bringing in 4.8 million people on the first showing, which according to one source is “more viewers than any other show in the history of the Discovery Channel”. It keeps being repeated and is still front and centre on Discovery’s website.

This film was designed to provoke a deep and thrilling fear in those who watched it. It is by no means the only one which has exaggerated the dangers posed by sharks, which has been a lucrative exercise since Jaws was first shown in 1975. But it takes this venture to a new level.

When a premise is irrational, the actions that follow from it are likely to be irrational as well. The Western Australian shark cull is likely to have been strongly influenced by an irrational terror of sharks – inculcated by shows of this kind. They succeed at the expense of the living world.