The mythical tiger pursued by helicopters and armed gendarmes speaks volumes about what is missing from our lives.

By George Monbiot, published on the Guardian’s website, 14th November 2014

The helicopters were scrambled, the marksmen were mobilised; the police swept the woods and everyone was looking VERY STERN AND SERIOUS after the prints of a dog were found on a molehill.

To which I say that the French authorities, who until a few hours ago were chasing a paper tiger into the woods near Paris, are as gullible as their counterparts in the UK. It’s not complicated. Tigers have retractable claws which are sheathed when they walk; the prints they were following have claw marks. They belong to a dog. Nor is the dog in question “an enormous coal-black hound” whose “muzzle and hackles and dewlap were outlined in flickering flame”, but a creature no larger than a cocker spaniel. It was probably on a lead. 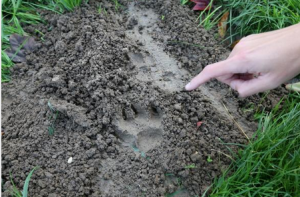 Pugmark left by the Paris Tiger (otherwise known as FrouFrou)

So far the army of police and firefighters deployed to find this beast have failed. A local official explained that the animal had probably been “snoring serenely somewhere” during the hunt. Too right it was. Perhaps in a basket at the foot of its owner’s bed, in a diamante collar with the phone number attached.

This morning a new set of prints was found, made by a different dog. They showed, the French media reported, that the tiger was closing on Paris.

Now the gendarmerie has at last admitted what seemed obvious from the beginning: there is no tiger.

A tiger, at least, was original. In Britain, most of the big cats reported (three-quarters according to a survey by the author Merrily Harpur) are black, and generally, according to the 2,000 or more people who claim to have seen them every year, “glossy and muscular”. They turn up everywhere. Even London isn’t spared the phantom menace: there’s a Beast of Barnet, a Crystal Palace Puma, and a Sydenham Panther. The Essex lion, which caused a cat flap in 2012 very similar to the Parisian frénésie, was an exception to the glossy, black rule.

These animals do not exist. A handful of beasts have been released from captivity and caught again, in most cases almost immediately. None of them are black. The evidence that big cats leave in abundance wherever they live – pugmarks, hairs, scats, dens, spraying points and scratching posts – is nowhere to be found.

A five-week hunt by Royal Marines, a six-month government commission on Bodmin Moor, police helicopters, armed response teams and the mass deployment of the best tracking, attracting and sensing technologies known to humankind has uncovered nothing but moggies, dogs and foxes. The hundreds of amateurs who have devoted much of their lives to finding or trapping these beasts have so far caught just one large carnivore: a cryptozoologist called Pete Bailey who was changing the bait in one of his traps and accidentally tripped the mechanism. He was stuck there for two nights, eating raw meat, before he was rescued.

I followed this phenomenon while researching my book Feral. I came to the conclusion that most of the claimed sightings are reported in good faith: people really do believe they have seen these beasts. The number of reports has risen greatly in recent years. Given that there is no more evidence for the existence of these animals in the wild than there is for the Loch Ness monster, I wondered what might explain it.

Every age has its paranormal phenomena, which reflect deep longings of which we may not be fully aware. The Victorians, afflicted by epidemics which snatched away children and young spouses, lived in almost perpetual mourning. This, I think, explains their obsession with revenants. Many thousands of people believed they saw ghosts, heard the voices of the departed, and could exchange messages with those they had lost through seances and table-turning. In the decades following the second world war, during which we entertained an almost utopian belief in the transformative potential of the white heat of technology, sightings of UFOs and aliens, almost unknown in previous eras, multiplied.

Over the past generation, our engagement with the natural world has collapsed. Since the 1970s the average area in which children roam without supervision has decreased by almost 90%. In one generation the proportion of children regularly playing in wild places in the UK has fallen from more than half to fewer than one in 10. As the abundance and diversity of wildlife has declined, as our lives have become tamer and more predictable and our physical challenges have diminished to the point at which the greatest trial of strength and ingenuity we face is opening a badly designed packet of nuts, perhaps imaginary big cats answer an unmet need, releasing us from ecological boredom.

Perhaps excitements like the French flap reawaken old genetic memories of conflict and survival, memories that must incorporate encounters – possibly the most challenging encounters our ancestors ever faced – with large predatory cats.

What we have just seen in France, as we have seen repeatedly in Britain, is a powerful will to believe. Amid the warnings and the terror, there is an unmistakable thrill, to which the officials are as susceptible as anyone else. They, and we, really wanted to believe there was a tiger on the prowl. And now the overwhelming sentiment will not be relief but disappointment.