The destruction of some of the last of the huge animals that shaped us inflicts a great wound in our lives.

By George Monbiot, published on the Guardian’s website 22nd May 2015

When I read about the attacks on the world’s remaining elephants and rhinos, the first thought that enters my head is: “these creatures used to be everywhere”. Almost every area of land and sea, in every region of the world, had a megafauna. Elephants lived throughout Europe, Asia, Africa and America until very recently in ecological time (30,000 years ago in Europe, 14,000 years ago in the Americas). Rhinos lived across Africa, Asia and Europe. Temperate forest rhinos lived in Britain during previous interglacials, and woolly rhinos lived here in colder periods. Russia was haunted by two gigantic species: humpbacked rhinos the size of elephants, eight feet to the crest, weighing perhaps five tonnes.

Lions were everywhere except Australasia (that had a marsupial equivalent); tigers ranged to the borders of Europe; hippos wallowed in British rivers; hyaenas survived into the early Mesolithic in Britain and northern Europe. All this is easily forgotten in a world afflicted by Shifting Baseline Syndrome: our habit of conceptualising as natural and normal the ecosystems that prevailed in our own youth, unaware that they were, even then, in an extremely degraded state.

The places in which monsters remain are the last tiny redoubts of what was once a global population. Of the 42 species of terrestrial mammals weighing more than a tonne that existed on Earth when modern humans left Africa, just eight are left: the African and Asian elephants, the larger of the two hippopotamus species and the black, white, Indian, Javan and Sumatran rhinos. Seven of them are threatened and four are critically endangered.

Even in the relatively recent past, the area of land over which these animals roamed has drastically declined. Maps published in a new paper in the journal Science Advances show that elephants, hippos and black rhinos occupied most of sub-Saharan Africa when their populations were first encountered by modern Europeans, but are now confined to a few tiny specks of land.

Why do the very large animals prove most susceptible to destruction? It’s partly because they reproduce slowly and partly because they require plenty of land and food for their survival, so the destruction of wild places tends to hit them sooner than it affects smaller species. But it’s also, I believe, because we have a deep-rooted urge to assert our status by killing them and owning their body parts. Even when people don’t do the killing themselves, possessing their skins, heads, tusks or horns has long been a means of acquiring bragging rights.

From the exquisite sculpture of two reindeer migrating across a river, carved from a piece of mammoth ivory 13,000 years ago and now housed in the British Museum, to the tiger skin rugs and heads of exotic beasts exhibited in stately homes today, bigging ourselves up by displaying our mastery of great beasts seems to be a fundamental human trait. Today’s aristocrats, some of whom are descendants of tribal chiefs, hang their ancestors on the wall to establish their genealogy and the heads of the animals they have killed beside them, to establish their prowess. Not much has changed in thousands of years.

Many of the world’s great sagas, tales of Ulysses, Sinbad, Sigurd, Beowulf, Cú Chulainn, St George, Arjuna, Lạc Long Quân and Glooskap, tell of struggles with megafauna real or imagined. Doubtless at least some of these stories originated in real battles with beasts whose true nature has been forgotten, as a result of their extinction. Think of Sinbad and the roc, which might be a garbled version of encounters with the elephant bird of Madagascar.

Today, some very rich people try to recreate these battles in ways that seem to me grotesque. They bid on the internet for the right to shoot a particular animal, sometimes paying tens of thousands of dollars, arrange a date, a time and a place, then fly over, in some cases with their taxidermists in tow, to bag the creature they have bought.

The animal is waiting for them – sometimes in an enclosure, sometimes just after being released from one, sometimes in the wild but already located by guides. There is no question about the outcome; otherwise the money would have to be repaid. I have heard that in some cases these people fly to a country for just a couple of days, during which they have booked the killing of several spectacular animals. Their diary secretaries arrange their schedules so that they can fit them all in. Once they have posed triumphantly with a foot on the beast they have just killed, they leave it for the taxidermist to process and move on to the next appointment with death.

This looks to me as dry and joyless as it is brutal and unsporting. Though I would struggle nowadays to bring myself to shoot a mammal or a bird (in my youth I killed and ate a few rabbits, squirrels and pigeons), I can understand the attraction of doing so in difficult circumstances, stalking and crawling and lying in wait much as a wild predator would. Canned, predetermined hunting of this kind seems empty of challenge and romance, bought rather than won. But such is the drive to establish dominion over the largest and most magnificent of beasts, and such is the obsession with conspicuous outcomes, that, for some people, none of this appears to matter.

Others are satisfied to remove themselves even further from contingency, by purchasing pieces of animals that have already been killed. My guess is that the use of rhino horn, tiger bones and other such body parts in traditional Chinese medicine, which are of course clinically useless, might be another manifestation of this deep-rooted drive, to make ourselves feel better by association with creatures larger or fiercer than ourselves.

You might have imagined that there were now plenty of alternative means of asserting our status and persuading ourselves of our own value, but traits that resonate with our evolutionary past – our ghost psyche – die hard.

So this great global tragedy continues. I know I should write about it more often. But I find it too upsetting. 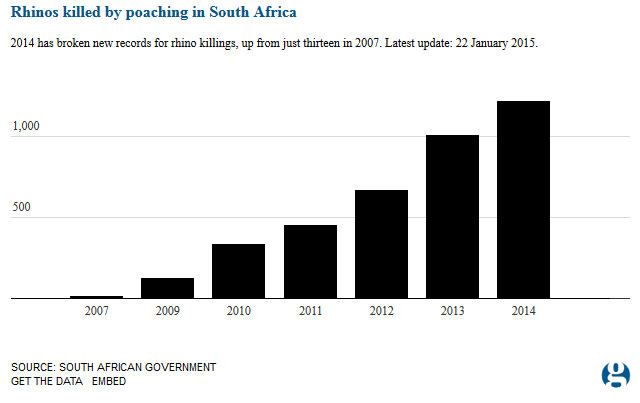 The reasons for this acceleration in the Great Global Polishing are complex and not always easy to tease out. But they appear to be connected to rising prosperity in Vietnam, the exhaustion of illegal stocks held by Chinese doctors and, possibly, speculative investment in a scarce and tangible asset during the financial crisis. Corruption and judicial failure help to keep the trade alive.

Already, the western black rhino is extinct (the declaration was made in 2011). The northern white rhino has been reduced to five animals: a male at the end of its anticipated lifespan and four females, scattered between Kenya, the US and the Czech Republic.

Similar stories can be told about some populations of elephants – in particular the forest elephants of West and central Africa.

It’s not just these wonderful, enchanting creatures that are destroyed by poaching, but also many of the living processes of the places they inhabit. Elephants and rhinos are ecological engineers, creating conditions that hundreds of other species have evolved to exploit.

As the paper in Science Advances notes, the great beasts maintain a constantly shifting mosaic of habitats through a cycle of browsing and toppling and trampling, followed by the regrowth of the trees and the other plants they eat. They open up glades for other herbivores, and spaces in which predators can hunt. They spread the seeds of trees that have no other means of dispersal (other animals are too small to swallow the seeds whole, and grind them up). Many trees in Africa and Asia are distributed exclusively by megaherbivores.

They transport nutrients from rich places to poor ones and in some places reduce the likelihood of major bushfires, by creating firebreaks and eating twigs and leaves that would otherwise accumulate as potential fuel on the ground. Many animal species have co-evolved with them: the birds that eat their ectoparasites, the fish that feed on hippos’ fighting wounds (some of these species, I believe, are now used for fish pedicures), the wide range of life that depends on their dung for food and moisture, on their wallows for habitats, on the fissures they create in trees for nesting holes.

Who knows what ecological processes the world has already lost through the retreat of the megafauna? Everywhere on earth, living systems have been radically altered by the loss of the great beasts. (I’ll be discussing the impacts of the extinction of European elephants in next month’s edition of BBC Wildlife magazine).

The destruction of some of the last populations of the animals that shaped us, as well as the natural world, inflicts, I feel, a great wound in our lives, diminishing the wonderful planet on which we evolved, shrinking imagination, crushing experience. All of us should have an interest in supporting those who seek to save these wonderful creatures.