When governments lobby in favour of air pollution, you can be pretty sure there’s corruption involved.

By George Monbiot, published on the Guardian’s website, 20th August 2015

It’s interesting to note how readily modern conservatism degenerates into a defence of corporate malfeasance.

By this I don’t mean a defence of corporations in general, which you might expect from a political movement aligned with the interests of wealth and power, but of the worst corporations in particular. That is not a pro-corporate position, as favouring bad practice undermines the competitive position of more responsible companies. It’s a decision to side with the worst capitalists against the better capitalists.

Because this policy appears in no one’s manifesto, and no one would seek to defend it in public, it is a classic indicator of political corruption. By this I mean operating on behalf of unrevealed and particular interests, rather than on behalf of either the constituencies that elected you or of the nation as a whole. Whenever you see the worst corporate practices championed, you know that influence is being peddled, that corporate party funding is being deployed, or that special favours are being granted through old boys’ networks and other forums of elite transaction.

Often, on both sides of the Atlantic, the worst corporations win. The reason is straightforward: they are the ones spending money on politics. You don’t need to splash out on policies that align with the interests of the public; you do need to spend heavily on policies that damage the public interest; otherwise they will not pass. If a company is spending lavishly on lobbying and campaign finance, it is likely to be because it wants something that no one in their right mind would welcome. Money rules, so the bad guys tend to finish first.

The latest example is the covert lobbying by the British government to try to weaken European air pollution rules on behalf of the coal industry.

Before going any further, I should point out that the coal industry today bears little resemblance to the coal industry of the past. There is just one deep mine left in Britain, which will shut by the end of the year; all the others are opencast pits: landscape destruction on a nightmarish scale, which is opposed by most of the communities it affects.

Despite this massive environmental impact, opencasting provides a tiny number of jobs: the disproportion between impact and employment is comparable only to supertrawlers and upland sheep farming. When this government intervenes on behalf of the coal industry, it does so on behalf of those who own and run it, rather than for the tiny remaining fragment of the workforce against which the Conservative Party has battled for years.

That the lobbying was done secretly, and sought to undermine rules that had already been diluted through corporate pressure, adds to the impression that this was an intervention against the people of Britain, rather than on their behalf.

The lobbying took place in the wake of a long series of new scientific findings about the impacts of air pollution on human health. If the government succeeds in undermining the common pollution rules, it is likely to be responsible for deaths that might otherwise have been prevented. These deaths will be concentrated in the country’s poorer communities.

The latest findings suggest a link between air pollution and the earlier onset of dementia. They appear in just one of many recent papers showing a strong association between high levels of pollution and cognitive decline. Others, for example, show a faster loss of brain volume among older people, reduced verbal IQ among young children and poorer performance by schoolchildren in attention and memory tests.

These studies augment a vast literature on other health impacts, such as lower birth weight, reduced lung development among children in polluted areas, asthma, heart attacks, strokes, lung and bladder cancers and higher susceptibility to both allergies and infectious diseases. Did you vote for that? I thought not.

As a government committee takes account for the first time of the impacts of nitrogen dioxide, the projected death toll in the UK is likely to be raised from 29,000 people a year to around 60,000. In London, the number of premature deaths ascribed to air pollution is 9,400 a year; which is now higher than the number of deaths attributed to smoking (8,400).

The ethical difference is self-evident. Though the issue is complicated by marketing, addiction and passive smoking, there is usually a degree of choice involved in exposing yourself to tobacco smoke. We have no choice about exposure to air pollution.

Why is this not a pungent political issue? Partly, I think, because of the widespread perception that the problem was solved many years ago. Take a look at these astonishing early photos of British industrial towns: 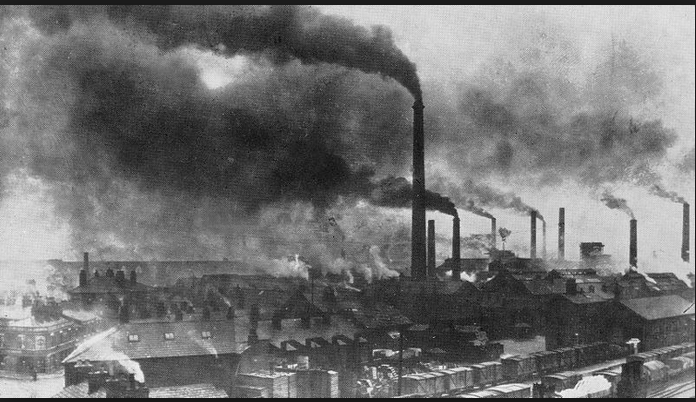 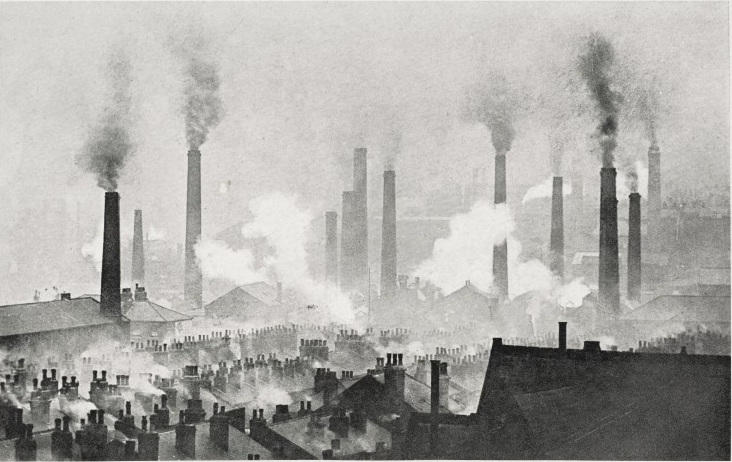 The smogs and fogs caused by pollution (smoke particles become the nucleii around which water vapour condenses) were regular features of urban life. Here’s how Charles Dickens describes one, in the opening pages of Bleak House:

“Smoke lowering down from chimney-pots, making a soft black drizzle, with flakes of soot in it as big as full-grown snowflakes – gone into mourning, one might imagine, for the death of the sun. … Fog everywhere. Fog up the river, where it flows among green aits and meadows; fog down the river, where it rolls defiled among the tiers of shipping and the waterside pollutions of a great (and dirty) city. … Fog in the eyes and throats of ancient Greenwich pensioners, wheezing by the firesides of their wards …”.

The Great London Smog of 1952, in which some 4,000 died, that helped, eventually, to produce our clean air acts, was one of many such incidents, albeit particularly severe. Its most deadly component was sulphur pollution from coal burning, which, incidentally, is what the Westminster government’s secret lobbying is now seeking to deregulate.

According to Stephen Mosley at Leeds Beckett University, bronchitis used to be known as “the British disease”. If you survived the other afflictions of urban life, you had a high chance of being finished off by the filthy air. The problem in some cities was so severe that it appears to have been partly responsible for the high level of rickets: the smoke ensured that children had insufficient exposure to sunlight. (Rickets, caused by a lack of vitamin D, that is usually supplied by other sunlight or diet, is now returning to Britain, though on a smaller scale,: one of the reasons is that some children scarcely venture outdoors.)

The dark business suit (originally known as the Manchester suit) was widely adopted because it didn’t show the dirt caused by the constant rain of smuts and soot. If you stepped out wearing bright or pale colours, it wouldn’t be long before you looked as if you had climbed out of a coal mine.

There have been major improvements over the past 60 years, though they are now being partially reversed by the rising number of diesel engines.

The World Health Organisation estimates that air pollution costs Europe roughly £1.4 trillion a year, equivalent to about one tenth of the continent’s GDP. While I’m suspicious of both the principle and methodologies of translating human health and human life into money, there’s little doubt that major costs are involved, for public services, business and, above all, sufferers. Pollution damages both productivity and government finances: it is no part of the duty of a capitalist party to defend it.

“We will lobby the European Union on behalf of polluting industries to reduce proposed smoke controls, endangering lives, threatening the cognitive health of both children and adults and damaging the country’s competitive position.”

Because it is inconceivable that such a policy could be publicly announced, its pursuit can be understood as an assault on democracy. It reminds us that corruption, like pollution, is not the preserve of either history or of other parts of the world; it is a potent force in Britain too. Like pollution, it seeps into our lives, invisible but pervasive.