This explains how the rough estimates of the area occupied by sheep in the UK were derived.

The total average consumption of lamb and mutton in the UK, both in and out of the home, is, according to the Agriculture and Horticulture Development Board, 5.0kg per person per year.

The UK’s total cropped area is easy to come by. It is given by the government as 4,722,000 hectares. But there are no comparable figures for sheep grazing.

Please note that the following gives very rough estimates/guesstimates of the area occupied by sheep grazing. It is remarkable that neither official nor academic figures are obtainable; it would be good to see this omission rectified.

We have approached the problem in two ways. The first was to obtain an estimate for the total upland area of the United Kingdom, then, as sheep grazing is the default land use almost everywhere, subtract from this area the other major land uses: deer stalking, grouse shooting and forestry. This tilts it towards a likely overestimate on one hand (some parts of the uplands are used for cattle or mixed cattle and sheep, and there are areas, such as bare rock, that sheep cannot graze) and a likely underestimate on the other (not all the land occupied by sheep is in the uplands, and sheep also graze on some of the land used for deer stalking and infest many woods from which they are meant to be excluded). This produced the following very tentative results:

Upland area of the UK (summing the figures provided by email by the devolved administrations /governments): 7,750,000 ha

Upland forestry/woodland: no figures available. I have used a very rough guess, going by satellite images, of 5%, giving 390,000 ha.

The second approach was to throw together all the sources of relevant information we could find, and use rough rules of thumb to try to make sense of it.

NB: these figures exclude common land, which covers large areas of the uplands in England, and is likely to be dominated by sheep.

There is no comparable breakdown for Wales. But the UK National Ecosystem Assessment states that agricultural land occupies 1,640,000 ha, of which arable land accounts for 162,000 ha, suggesting that livestock occupies the rest: 1,478,000 ha. If we were to assume the same distribution of livestock to that in the English SDAs, this would give 930,000 hectares of land occupied by sheep there.

A bar chart in a report by the Scottish government from 2010 suggests that rough grazing occupies approximately 4m ha of that nation and grassland standing for 5 years or longer approximately 1m ha, in other words 5m ha in total. If we were to apply the ratio derived from the English survey, this would give a total of 3.1m hectares to sheep. The following maps, published in the Economic Report on Scottish Agriculture, 2016, suggests that this proportion is in the right ballpark: 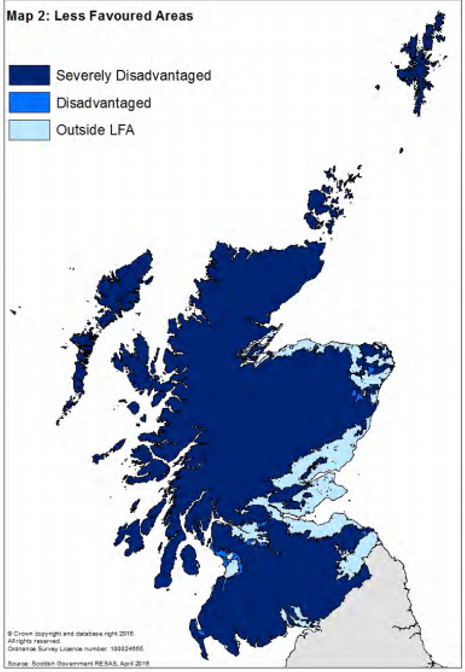 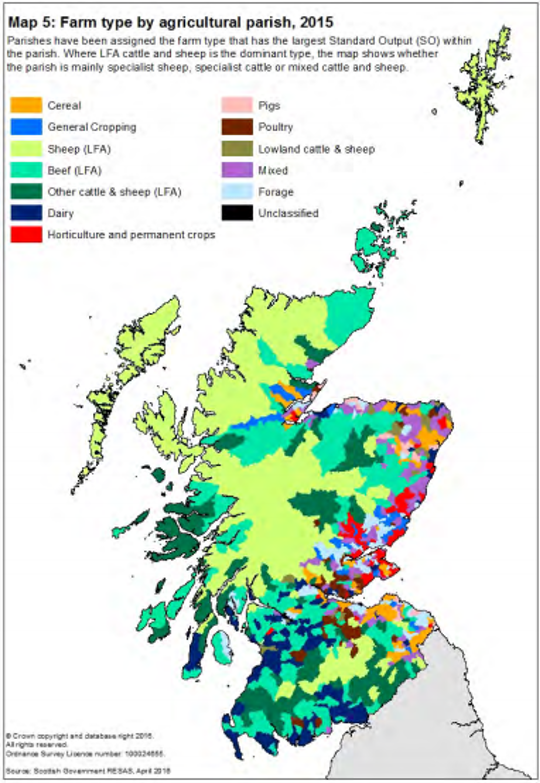 In Northern Ireland, there are 451,445 ha of agricultural land in severely disadvantaged areas, according to figures compiled by the RSPB. Applying the English proportion of 63% would give 280,000 ha under sheep.

Let’s round this down, to reduce the likelihood of exaggeration. Any improvements on 4,000,000 hectares?