How Did We Get into This Mess?

Where we have gone wrong, and what to do about it. 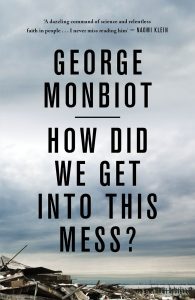 George Monbiot is one of the most vocal, and eloquent, critics of the current consensus. How Did We Get into this Mess?, based on his powerful journalism, assesses the state we are now in: the devastation of the natural world, the crisis of inequality, the corporate takeover of nature, our obsessions with growth and profit and the decline of the political debate over what to do.

While his diagnosis of the problems in front of us is clear-sighted and reasonable, he also develops solutions to challenge the politics of fear. How do we stand up to the powerful when they seem to have all the weapons? What can we do to prepare our children for an uncertain future? Controversial, clear but always rigorously argued, How Did We Get into this Mess? makes a persuasive case for change in our everyday lives, our politics and economics, the ways we treat each other and the natural world.

“A dazzling command of science and relentless faith in people … I never miss reading him.”

“George Monbiot is always original—both in the intelligence of his opinions and the depth and rigour of his research.”

“His passion for social and ecological justice is undimmed by twenty-first-century cynicism. His desire for knowledge across the widest gamut of subjects (scientific, historical, political and cultural) enables him to reach places which are foreign territory to many of us.”

“What most impresses in Monbiot’s clever, elegant writing is the way he strives to think beyond protest towards realistic, representative solutions to the problems of world politics and trade.”

“A writer of eloquence and passion.”

“An excellent critique of much that is wrong with modern society.”