A New Politics for an Age of Crisis

What does the good life—and the good society—look like in the twenty-first century?

A toxic ideology rules the world – of extreme competition and individualism. It misrepresents human nature, destroying hope and common purpose. Only a positive vision can replace it, a new story that re-engages people in politics and lights a path to a better world. 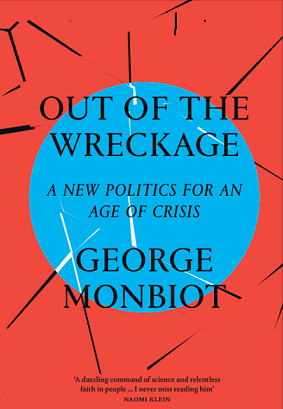 George Monbiot shows how new findings in psychology, neuroscience and evolutionary biology cast human nature in a radically different light: as the supreme altruists and cooperators. He shows how we can build on these findings to create a new politics: a ‘politics of belonging’. Both democracy and economic life can be radically reorganized from the bottom up, enabling us to take back control and overthrow the forces that have thwarted our ambitions for a better society.

Urgent, and passionate, Out of the Wreckage provides the hope and clarity required to change the world.

“This is a highly contemporary book, potentially offering the left a set of implements with which to win arguments on terrain often dominated by the populist right. After the depressing sight of Boris Johnson touring ex-industrial regions in a bus promising NHS funding that he knew would never materialise, the need for a more sincere vision of how people might “take back control” remains pressing. Monbiot’s hopeful, practical energy is precisely what the left needs right now. … Out of the Wreckage is partly an activists’ manual, which aims to coordinate and energise those who want a different world. You don’t build an evocative story out of warnings and fears. I hope it succeeds.”

Will Davies, The Guardian

“George Monbiot, with the clarity and straightforwardness that is his trademark, has managed to lay out our dilemma and our possibilities – this book strikes the necessary balance between visionary and practical, and does it with real grace.”

“Inspired and inspirational, George Monbiot’s call to act gives new coherence to a movement that is changing as it learns. So much has to change that the scale of the task can feel overwhelming. But we have changed our lives as fast and fundamentally before.”

– Danny Dorling, author of Inequality and the 1%