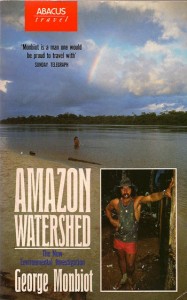 Despite attempts by the military police to kill him, George Monbiot followed the story of the peasants being expelled from their homes in other parts of Brazil and forced to move into the Amazon.

He went to expose the effects of a vast military project opening up the northern frontier and achieved, at great risk, what other investigators have tried and failed to do, following timber cut illegally from Indian reserves all the way back to the retailers in Britain.

He demonstrates that it is the timber industry, not ranching, which is now the greatest threat to the forest. Monbiot explores the underlying reasons for deforestation in the Amazon, looking at why current efforts to prevent it are so unsuccessful.

He examines the role of the British and American governments in promoting, wittingly or otherwise, this great ecological catastrophe.