The corporate takeover of Britain 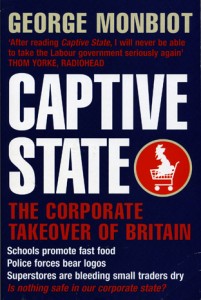 George Monbiot uncovers what many have suspected but few have been able to prove: that corporations have become so powerful they now threaten the foundations of democratic government. Many of the stories he recounts have never been told before, and they could scarcely be more embarrassing to a government that claims to act on behalf of all of us. Captive State is a devastating indictment of the corruption which which our political leaders have succumbed.

“This may be the most important book of the year … Monbiot is a writer of eloquence and passion.” The Observer

“A pyjama party at Castle Dracula couldn’t be any scarier than the corporate conspiracy that Monbiot uncovers. … John Pilger, Mark Thomas, Noam Chomsky, Thom Yorke and Julie Burchill have all applauded Captive State and for good reason. It’s the best non-fiction paperback of the year so far.” The Sunday Herald

“This book, politically speaking, is essential … Did I say ‘essential’ earlier? I meant ‘compulsory’”. Nicholas Lezard, The Guardian

“After reading Captive State, I will never be able to take the Labour government seriously again.” Thom Yorke, lead singer of Radiohead.

“Monbiot gives the green movement a glamour it has never previously enjoyed … the originality of his thought makes him uniquely influential.” Michael Gove, The Times.

“George Monbiot writes in a terse investigative style that I had feared was out of date … what he has written emerges as the most sustained indictment of the Blair administration yet published.” Paul Foot, London Review of Books

“One of the best-written calls to arms. He applies a refreshing directness to the evidence, allowing the scandals he relates to do the polemical work for him … elegant and convincing.” The Times

“It’s impossible not to take Monbiot’s arguments seriously. This is a disturbing book which raises fundamental questions about the way democracy actually works in this country.” The Mail on Sunday

“A well-written, well-researched and potent critique … few get to the heart of the matter like Monbiot and very few write a compelling enough script to make you want to shout angry slogans about the injustices of corporate greed.” Management Today

“The most accessible, incisive and damning account I have read of the cancerous effect of market capitalism on the very premises of civilised life in Britain. This brilliant, urgent book cries out to be read.” John Pilger