An Investigative Journey through Kenya and Tanzania 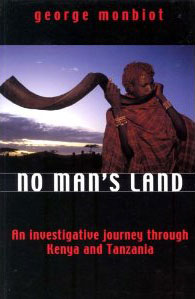 “George Monbiot has already done more to change the world and our perception of it than most of us can hope to achieve in a lifetime . . . Now he has exposed what is going on in Kenya and Tanzania, where the nomadic people are being driven off their land and systematically murdered . . . As we have learnt to expect, he pulls no punches, naming names and pointing an unerring finger at the sinners and their blatant corruption. Yet he writes with such charm and erudition that no one could mistake this for the ravings of a fanatic … We need people like Monbiot more than ever before.” New Scientist

“Monbiot brings to East Africa the same combination of scholarship, foolhardy courage and passionate commitment which characterized his previous books on Indonesia and Brazil. In these respects – more than any other travel writer I can think of – he embodies all the great virtues of the Victorian explorers . . . required reading for anyone who wishes to understand better the problems of modern Africa.” Niall Ferguson, Daily Mail

“His observations of their way of life, traditions and folklore are fascinating and intricate: like the best anthropologist, he not only perceives, but also penetrates, yet with the accessible immediacy of the travel writer, bringing alive both places and people . . . At the beginning, Monbiot’s exceptionally well-written travels induced a romantic yearning to return to the bush; by the end, eyes open and all notion of romanticism vanished, I was seething with indignation”. Sunday Times

“Monbiot, still only thirty, has written a splendid book, deserving of a prize and one that makes one pause in the lemming-like rush of life in the West to ponder the fate of fellow human beings whose dignity in the face of adversity leaves us with a lot to be desired. The bloodsoaked plains of Africa have shaken the West but it has not stirred. Monbiot’s book should prod us all into action.” Western Morning News

“George Monbiot investigates what could be the final struggles of Africa’s surviving pastoral peoples. He also tells his own story, of a perilous journey through one of the world’s harshest environments, writing with humour and a refreshing lightness of touch.” Daily Telegraph

“This is a fascinating book that occasionally blossoms with haunting prose … The future of East Africa’s nomads is a cause worth fighting for. They are fortunate to have Monbiot on their side.” Independent on Sunday

“I found the book moving, compassionate, bristling with rage, in tone both exhilarating and depressing. What I found really great about No Man’s Land was the fact that George took the nomads of Kenya and Tanzania on their own terms.” Biyi Bandele Thomas, Kaleidoscope, Radio 4

“He is extremely perceptive on the hopelessness, the loss of identity, that nomads feel when turned out of their traditional grazing rounds and robbed of their cattle, whose care is their only skill and their sole means of life . . . But his tale is always readable because it is told by means of talks with people. As to style, he hits the reader a smack now and then with a phrase that is sharply right.” The Tablet

“Monbiot’s book has some disturbing sections, of beatings, killings, starvation and famine. But it also has passages describing great beauty, of landscapes, birds, weather and atmosphere … An inquiring book by a sensitive man.” Africa Analysis