An investigative journey through the forbidden lands of West Papua 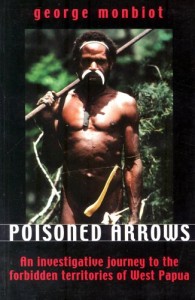 At great personal risk and with forged travel documents, George Monbiot bluffed, cheated and forced his way into the remotest place in the tropics: the forbidden territories of West Papua (Irian Jaya), in Indonesia. Sealed from the outside world by the Indonesian army, it is home to tribes who have developed a unique and remarkable culture, and who are now, along with their forest land, being systematically obliterated. Monbiot uncovers a story never properly documented before. This is a new edition of one of the classics of investigative travel writing.

“It is stunning … he ran great personal risks, living under false identities and suffering extraordinary tropical fits – but the strength of the book is that he resists the twin temptations of humourless campaigning and macho bragging …. It is far more than a travel book, yet as entertaining as any. Don’t miss it.” Sunday Express

“Monbiot is fascinating about the forest, the birds, the plants and, above all, the people. His descriptions of the various tribes and their beliefs are both erudite and affecting in their warmth. He is also extremely funny. …. Running through this book is, of course, the self-portrait. And very charming it is. Monbiot is a man one would be proud to travel with. Perhaps it’s that which makes it a good travel book.” Sunday Telegraph

“Their adventures in Irian read like Raiders of the Lost Ark as they tricked their way past Indonesian police, army and spies, hacked their way over unmapped mountains and forests, and lived with tribes who were often paralysed with trauma. But although the book reflects Monbiot’s experiences and personal feelings, it avoids the tacky journalese of many other investigative authors. The result is astonishing: part travelogue, part anthropology and the rest well-researched political journalism.” New Scientist

“A cross between Redmond O’Hanlon and John Pilger: outlandish tropical fauna and well-served outrage … Monbiot himself is honest, engaging and modest, and there aren’t too many writers like that left.” Sunday Correspondent

“This is no frivolous jaunt … Monbiot gallantly risks his own life and that of his friend Adrian to bring back his disturbing report.” Mail on Sunday

“George Monbiot’s fresh, often amusing account offsets the young author’s wonder at the untouched natural beauty of the place with his horror at the systematic genocide being waged against its ancient tribal culture.” Sunday Telegraph

“A book that everyone should read.” Norman Lewis