A manifesto for a new world order 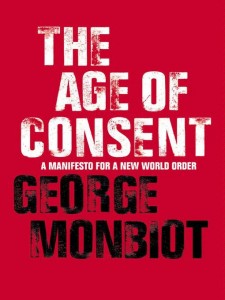 “Our task is not to overthrow globalisation, but to capture it, and to use it as a vehicle for humanity’s first global democratic revolution.”

All over our planet, the rich get richer while the poor are overtaken by debt and disaster. The world is run not by its people but by a handful of unelected or underelected executives who make the decisions on which everyone else depends: concerning war, peace, debt, development and the balance of trade. Without democracy at the global level, the rest of us are left with no means of influencing these men but to shout abuse and hurl ourselves at the lines of police defending their gatherings and decisions. Does it have to be this way?

Drawing on decades of thinking about how the world is organized and administered politically, fiscally and commercially, Monbiot has developed an interlocking set of proposals, which attempts nothing less than a revolution in the way the world is run. If these proposals become popular, never again will people be able to ask of the critics of the existing world order, “we know what they don’t want, but what do they want?”

“Clear, elegant, radical and imaginative, The Age of Consent is a book that not only challenges us to question the status quo, but also inspires us to want to change it.” John Burnside, The Scotsman

“At last, the global justice movement has found a vision as expansive and planet-wide as that of the American neoconservatives. Let the battle of ideas commence.” Johann Hari, Independent on Sunday

“What most impresses in Monbiot’s clever, elegant writing is the way he strives to think beyond protest towards realistic, representative solutions to the problems of world politics and trade.” Andy Arkell, The Times

“This is an extremely important book. George Monbiot offers a searchingly rigorous analysis of the sources of American power and presents a package of proposals that would radically redraw the present world order. It is breathtaking in its radicalism, but for anyone who is serious about tackling the current US hegemony, it is difficult to fault the logic. … if it is far too radical for some tastes, can they suggest any lesser options that will produce the same vast improvement in world justice and prosperity? The floor is theirs.”
Michael Meacher, The Guardian.

“The Age of Consent is powerful stuff. Monbiot is to be congratulated on an elegant and sustained feat of rhetoric. … an admirable attempt to open our minds to new possibilities and spheres of debate.” Martin Vander Weyer, Daily Telegraph

“It is the sense of revolutionary enthusiasm that shines through this book. In the end it is all about engagement — about igniting radical action and creating new possibilities. ‘It is,’ he concludes, ‘the exultation, which Christians call ‘joy’, but which, in the dry discourse of secular politics, has no recognised equivalent. It is the drug for which, once sampled, you will pay the price.’ I’m not sure what Monbiot’s on, but can I have some too?” Iain McWhirter, Sunday Herald

“This book is rightly attracting attention, and raises issues that have long been neglected or deliberately buried … It should make people think; and as the author well says, if we do not like his ideas, then think of better ones. He believes that leaving things as they are is not a serious option. He makes his case.” Sir Crispin Tickell, Financial Times

“The Age of Consent is a brilliant example of sustained imaginative engagement with political and economic realities. It produces a fantastic but surprisingly compelling and resilient edifice.” Ian Syson, The Age

“George Monbiot’s The Age of Consent is a bracing challenge to the complacency of all varieties of establishment thinking. …. his book is an arresting contribution to new thinking.” John Gray, Independent

“A compelling and radical argument for comprehensive change in world politics. Monbiot’s occasional cocksure judgments are modified by his readiness to engage in arguments with opponents and to state his case clearly and well. It deserves and needs to be debated by them.” Paul Gillespie, The Irish Times

“The scale of Monbiot’s thinking is of the order we need if we are to address the problems that now confront us. The muscles he suggests we flex could grow in equivalence to the vested interests we need to overthrow. Let the debate begin!” New Internationalist

“His proposals are appealing, provocative and idealistic … his attempt to think the unthinkable makes Monbiot seem, in a good way, like a licensed jester whose value lies in showing that alternatives are possible.” Sunday Times